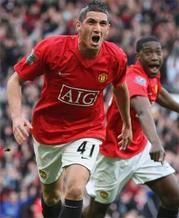 Man Utd play Boro this lunchtime, but it won’t be a full-strength United who run out at the Riverside. Alex Ferguson has said he will rotate his squad, so one of Cristiano Ronaldo and Wayne Rooney will be absent from the starting XI, possibly both. Kiko Macheda might start in Ronaldo’s place, for example.
This is good news for Gareth Southgate, but bad news for the other relegation-threatened clubs: West Brom, Newcastle, Hull and Sunderland. Their managers will be pissed off that United aren’t playing their strongest team against a relegation rival. Still, United’s squad is so strong that I don’t think it matters much if Ronaldo or Rooney is missing.

Is it fair that Fergie tinkers with his squad to the possible detriment of clubs which are facing a drop into the Championship? Yes, of course it is. I think the Scot can do what the hell he wants, as long as his team gives 100% – he’s still trying to wrap up the league, don’t forget. It might work out well for Boro that they get to play United in between a Champions League semi final tie, but that’s the luck of the fixture draw. However, I understand why the likes of Alan Shearer and Phil Brown won’t like it. There’s a lot of money at stake here.
Agree? Disagree? Your vote counts! …