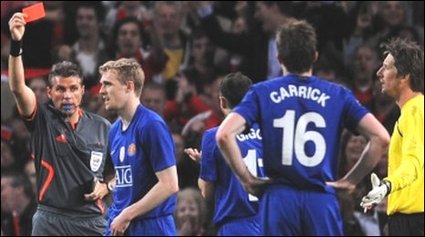 1. What sound does a one-armed man clapping make? Or the sound of a massive anticlimax? I imagine it’s similar to the noise inside the Emirates after 11 minutes, when the game was effectively killed off by C-Ron’s 40-yard free-kick (great strike but Manuel Almunia should have saved it). Such a shame, for Arsenal, for ITV, for casual viewers – indeed, for everyone but United fans. And Gooners inside the ground had made a special, once-a-year effort to make some real noise, bless ’em.
2. Watching a match for 80 minutes without any drama or suspense is an eerie experience. Thanks to the away goal rule, this game was pronounced dead faster than any other I remember. It was like watching an extended training session, with United cast as the ruthless masters, and Arsenal the stunned pupils.

3. When your team is in the shit, the last thing you want is to have to listen to the prattlings of Clive Tyldesley and Jim Beglin. That said, I enjoyed Beglin’s description of Korea’s Park Ji-Sung: “He’s just dogged.” Nice adjective choice, Jim.
4. When C-Ron ditches the petulance, as he did last night (easily done when you know you’re going to win, of course), he is one hell of a player.
5. Arsene Wenger is a stubborn idealist. All managers are stubborn in their own way, granted, but Wenger’s strange reluctance to splash the cash on high-quality, experienced players has left Arsenal without a trophy for another season. Arsene, you have to get over you obsession with potential – you’re a head coach, not a scout. And it’s OK to play long balls. Football doesn’t always have to be aesthetically pleasing. Just look at Messrs Bould, Adams, Dixon and Winterburn. Ugly as hell, in more ways than one, but they got the job done.
6. Will this result be the catalyst for Cesc Fabregas to leave Arsenal? Probably not, but I think he looks like a man who wants a new challenge. Arsenal’s repeated failure to win stuff must be getting him down, and I wouldn’t blame him for telling his agent to make a quiet call to Barcelona (although, with Xavi and Iniesta on fire, Barca don’t need another Spanish playmaker right now).
7. Props to Samir Nasri for at least making an effort. He was Arsenal’s best player by a mile.
8. United’s best player? Hard to say – almost all of them brought their A Game to north London. Everywhere you looked, United were better than their opponents.
9. Darren Fletcher, you have no luck. The Scot played his way into United’s CL final starting XI, but he’ll miss the big match after the Italian referee sent him off. A big mistake (Fletcher touched the ball before he brought down Fabregas), and I hope UEFA overturn the decision. The red card can be rescinded but the ref has to make that request, which is unlikely. Shame – Fletcher was terrific last night.
10. Bring on Man Utd v Barcelona. Please.
Got an 11th conclusion to add? Why not leave a comment with your thoughts on the game…