The best reaction to United’s walk in the park 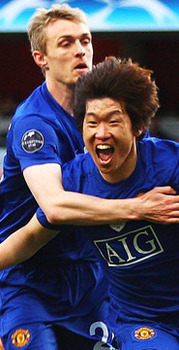 “It was 11 men against 11 babies. We never doubted ourselves.”
Patrice Evra gets cocky after the event
“It is the most disappointing night of my career. I felt the fans were really up for a big night and to disappoint people who stand behind the team so much hurts.”
Don’t cry for me, Arsene Wenger
“He’s one of the most honest players in the game and to miss the final, it’s a tragedy.”
Alex Ferguson on the luckless Darren Fletcher. UEFA have since confirmed that the red card will stand
“I played with a lot of pain in my stomach worrying about missing the final. I said to the boss if we score a third goal I want to come off because I just cannot miss that match [the CL final].”
Evra again. United did score three, and Fergie did take him off
More reaction below…

“It is just so harsh for Darren. He has been unbelievable this season and when a situation arises like that it is so hard to take. It was not deserved because we can all see the referee might have got it wrong. I could not believe it when the red card came out.”
Michael Carrick with more Fletcher-flavoured solidarity
“I have to take some distance from this season. We are on a consistent run, twenty-one games unbeaten [in the league], but recently in a game where it mattered, like Chelsea or tonight, we couldn’t win and that, of course, needs thinking.”
Prof. Wenger again
“I thought they couldn’t handle Ronaldo – he was the difference. And the two quick goals knocked the wind out of their sails.”
Alex Ferguson gets nautical on Arsenal’s asses
“I think we have taken a step backwards. Not only me, but the team. We need some players. We had Hleb gone to Barcelona, Flamini gone to Milan and it was quite difficult to play.”
Emmanuel Adebayor fesses up
“It was not an easy match. Arsenal are a good team, so to score three goals at their own ground is just amazing. The whole team were superb and we deserve to be in the final.”
C-Ron lays on the blandness
“I’ll be watching the Chelsea game but I don’t mind who wins. People say Chelsea will be more dangerous because they’ll want revenge but I don’t know. Barcelona are a brilliant team and Chelsea have a lot of power, so both will give you a tough game. But we can beat either of them.”
Wazza Rooney swigs from Patrice Evra’s cocky (the y is crucial here) juice