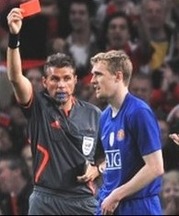 That’s right folks, Poll says Fletcher deserved to be sent off in last night’s CL semi. The Scot will now miss the final.
In his Daily Mail column, Poll wrote:

“Italian referee Roberto Rosetti had a fine match and can justify in law the penalty he gave after Darren Fletcher brought down Cesc Fabregas. When commentators and former players say: ‘He got the ball, it can’t be a foul,’ they are wrong.
“Even though Fletcher got a slight touch on the ball, Rosetti felt it was impossible for the Manchester United midfielder to avoid taking his opponent in the follow-through. Therefore, he had no option but to dismiss the Scot.”
Well, Mr “I once showed a player three yellow cards in the same match” Poll, the law is an ass, and so are you. Rosetti had the option of using common sense. Fletcher and Fabregas got tangled up, but the former nicked the ball and that has to be defined as a fair tackle, every time.
Don’t you think? Vote below…