Battle of the right-backs 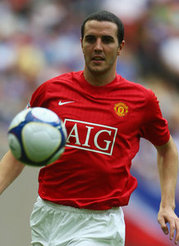 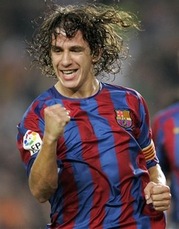 John O’Shea (Man Utd)
The much maligned Irishman will never win a place in United’s Hall of Fame, but Alex Ferguson trusts him, and that vote of confidence means a lot to a player. I’m sure it’s no accident that Fergie endorsed O’Shea’s place in the starting line-up before that of any other player – Barcelona must see O’Shea as a possible weak point in United’s defence, so it makes sense for United’s gaffer to boost his player’s confidence.
Anyway, O’Shea is greatly improved this season and I don’t expect Thierry Henry – who is a shadow of his Arsenal self – to trouble him much. However, if Lionel Messi switches to the left flank, then O’Shea, who isn’t the quickest on the turn, might struggle.
Mark: 7/10

Carles Puyol (Barcelona)
Most experts guess that Barca’s wild man will start tonight at right-back, thanks to the absence of Dani Alves (suspended), the club’s first-choice RB. I imagine Fergie will be rubbing his hands at the thought of matching Wayne Rooney (who will surely start on the left flank, where has been superb in recent games) against the erratic Puyol – there’s a very good chance that Barca’s club captain, who likes to rough up opponents, will pick up an early yellow card (or worse).
Puyol was great at Euro 2008, but I have never rated him as world-class. He’s like a Catalan John Terry, which means he’ll always give 100% but is prone to errors.
Mark: 7/10
Verdict: O’Shea is a more composed player than Puyol, and at 28 he’s in the form of his life. And because Puyol will be playing in an unfavoured position, my nod goes to the Irishman. But who do you choose? Vote below: