Will Rio merk his former team-mate? 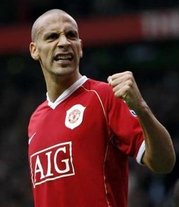 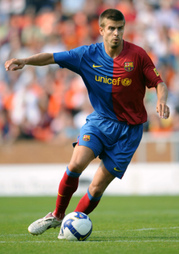 Rio Ferdinand (Man Utd)
Ferdinand is one of the best centre-backs in the world, and he’s now at his peak. There’s nothing he lacks really, but he tends to lose concentration at times – though not often enough for me to label it as an obvious weakness.
The one doubt over Rio is his fitness. He didn’t play at Hull on Sunday, and while he claims to have fully recovered from a calf strain, there must be a nagging doubt in the back of his mind that he is marginally less than 100% fit; when Lionel Messi is running at you, the ball seemingly tied to his laces, you need your absolute A game. That said, Ferdinand has proved before, many times, that he is more than a match for the world’s best forwards.
Merk: 9/10

Gerard PiquÃ© (Barcelona)
Fergie would have loved to hang on to PiquÃ©, but the young Catalan was never going to be able to resist the call of his home club.
I wrote recently in my column for BigSoccer that PiquÃ© has the goods to become the best central defender in the world. A bold claim maybe, but PiquÃ©’s development curve suggests he can fulfil my prediction…
I wrote: “PiquÃ© has all the attributes required of a modern central defender: height (he’s 6ft 4in and very solid in the air), athleticism, power, pace, and intelligence (i.e. positional sense, composure, and general reading of the game).
In the two [Champions League] legs against Chelsea, and also in the most recent “Clasico” in La Liga, I saw a totally different PiquÃ© to the raw, gangling youth who struggled to break into Man Utd’s first-team squad. He was outstanding in all three matches mentioned, not only at the back but also going forward.”
Tonight, PiquÃ© will probably have to play at the back alongside Yaya TourÃ©, but that didn’t faze him at Stamford Bridge a few weeks ago. And the fact he’s playing against ex-team-mates counts in his favour. He knows better than most what Rooney and Ronaldo are capable of. Whether he can stop them for 90+ minutes is another question.
Mark: 8/10
Verdict: PiquÃ© is one for the future. Ferdinand’s time is now.