He comes from Serbia, he’ll fookin’ murder ya 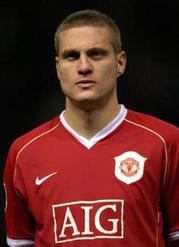 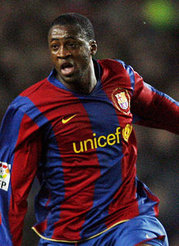 Nemanja Vidic (Man Utd)
United’s Player of the Year, as voted for by his team-mates and the club’s fans, makes the perfect foil for Rio Ferdinand. The Serb is a footballing Terminator who absolutely will not stop when it comes to doing his defensive duties. If Barcelona can rattle him early, then he is prone to mistakes (see his performance against Liverpool at Old Trafford this season, when Nando Torres tormented him), but I’m sure Vidic has learned lessons from that low point.
United fans would not swap Vidic for any other defender in the world, and I don’t blame them. The guy is a machine.
Mark: 9/10

Yaya TourÃ© (Barcelona)
With Rafa Marquez out injured, and Carles Puyol needed to cover the suspended Dani Alves, it looks like Gerard PiquÃ© will be partnered again by Kolo’s not-so-little brother.
I’m a big fan of TourÃ©, but only when he is playing in his favoured holding position in central midfield. He is one of the best in the world in that role, but tonight his versatility will be truly tested. Physically, he is good enough to fill in at centre-back (at 6ft 3in he has the brawn to match C-Ron and co.), but I wonder if he can go for 90 minutes without slipping up at least once. Centre-back is a specialist position, and Pep Guardiola will be taking a big risk if he plays TourÃ© there. But Barca’s gaffer has little alternative.
Mark: 7/10 (8/10 as a midfielder though)
Verdict: Vidic for me, every time. Against an out-of-position midfielder, it’s no contest.