Time for United’s quiet man to step up 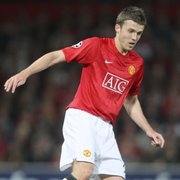 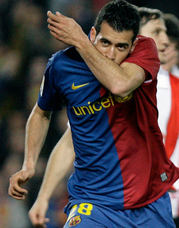 Michael Carrick (Man Utd)
Carrick is the football equivalent of a Saab – he’s classy and efficient but a bit dull. That’s not a criticism. I’m a huge fan of Carrick, and still think he doesn’t get as much credit as he deserves. He makes United tick, just as Roy Keane used to, only Carrick does it without fuss or bluster. Some critics say he never asserts himself in big games, but then Carrick’s style is not assertive. That doesn’t mean he’s not effective though.
I think Carrick will miss Darren Fletcher tonight. The pair work very well together. I have seen Carrick play well alongside Anderson, but the latter is more unpredictable than Fletcher, so there may be times when United’s midfield struggles to keep track of Xavi and Andres Iniesta.
Mark: 8/10

Sergi Busquets (Barcelona)
At time of posting, I’m not certain that Busquets will start as the water carrier for Xavi and Iniesta. Reports suggest he’ll get the nod over Seydou Keita.
I don’t know too much about Busquets, apart from that he’s very highly rated by his club. He’s only 20, but Pep Guardiola has no qualms about starting him in such a massive game. From what I’ve seen, “Biscuits” reminds me of a young Javier Mascherano -Â he keeps the ball moving with one or two touches, and has the discipline to follow a very specific tactical brief. In this case, he’ll be instructed to protect Barcelona’s makeshift back four, while also winning his fair share of balls in midfield, when he can then distribute, at pace, to Barca’s most creative players.
Mark: 6/10
Verdict: Carrick is in splendid form, and for me he’s a clear winner over the inexperienced Busquets.