Vote on this crucial midfield battle 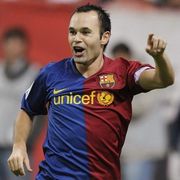 Anderson (Man Utd)
It would be unfair to call Anderson a headless chicken – he is a more intelligent player than that -Â but he does have a tendency to run around like a man who left his brain in the changing room. That could be a good or bad thing for United. But as I said in my last head-to-head, I think Michael Carrick would prefer to have Darren Fletcher alongside him. Fletcher is more disciplined and more mature.
What Anderson offers is the vitality of youth. He is more robust than Fletcher, and also capable of making surging, box-to-box runs. With Anderson on the pitch, Barcelona’s midfield won’t get any time on the ball. And the young Brazilian has already proved that he is not scared of the big occasion (or players with big reputations), so there’s no danger he’ll be caught in the headlights.
Mark: 7/10

Andres Iniesta (Barcelona)
Under Pep Guardiola, Iniesta has become arguably Barcelona’s most important player. Guardiola has long been a fan of the pale playmaker (since he first saw him in Barca’s youth team, in fact), and this season Iniesta has emerged from Xavi’s shadow: together, they form a brilliant midfield unit. Or, as Fergie said, “I don’t think Iniesta and Xavi have ever given the ball away in their lives.”
But if I was a Barca fan, I’d be slightly concerned that Iniesta goes into the final on the back of a tear to his right thigh. He is fit to start, but how long will he last? Anderson will test his leg early, for sure.
Mark: 9/10
Verdict: Anderson is capable of having a huge final, especially if the match goes into extra time, when his extraordinary stamina will count. But Iniesta is the more dangerous player, and is set to come of age in Rome (as long as his leg holds out).