Giggsy has his work cut out here 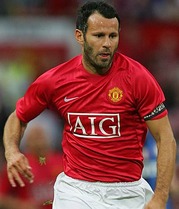 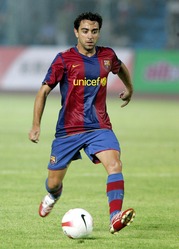 Ryan Giggs (Man Utd)
Giggsy is very well respected in Europe, I’d say more so than any British player of the last 15 years. He’s now coming to the end of his illustrious career, but he’s still worth his place in United’s starting line-up (just). I doubt he’ll last the full 90 minutes though.
Giggs’ strengths are well-known, and I don’t need to remind most of you here just how good a player he is. At 35, his legs are not what they were, but he’s a different animal now – more a playmaker than a flying winger.
Mark: 7/10

Xavi (Barcelona)
No one loves a football like Xavi. His sublime close control and exquisite range of passing is unmatched. A couple of years ago, he was criticised for loving the ball too much -Â i.e. not wanting to make a risky pass, for fear of losing the ball – but, as we all saw at Euro 2008, he’s corrected that tendency.
Xavi will need protection from Sergi Busquets but he can look after himself, and while I think he may start cautiously, expect him to exert a greater influence as the final wears on.
Mark: 9/10
Verdict: Both Xavi and Giggs are all-time greats-in-waiting. The main difference is, Giggs is past his prime (yes, even though he is the current PFA Player of the Year), while Xavi is at the very top of his game. So Barca win this one.