Getting down to the business end of the Champions League finalists 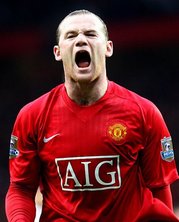 Wayne Rooney (Man Utd)
Who knew Rooney would turn out to be a world-class left winger? But that’s what he’s become, even if it’s not the first position he’d choose to play. Rooney’s successful conversion – even if it’s temporary – is testament to the managerial quality of Alex Ferguson. I can’t imagine many other gaffers being able to not only tame Rooney (not completely, of course), but also convince him to do a disciplined job on the left wing.
In the build-up to the final, Barcelona’s players have mentioned Rooney, not Ronaldo, as the player they fear/respect most in United’s attack, and while that could be a smokescreen (who wouldn’t fear Ronaldo?), there’s no doubt that Rooney has come of age this season. I can’t wait to see how he gets on against Carles Puyol -Â that will be one fierce scrap.
Mark: 9/10

Thierry Henry (Barcelona)
Henry is still capable of destroying defences – witness his performance against Real Madrid in La Liga a few weeks ago -Â but it happens with increasing infrequency. The Frenchman will start tonight, but he’s only just recovered from the knee injury he picked up in the second half of Il Clasico. That’s a worry. Unless Henry is on the top of his game, I can’t see him troubling even John O’Shea. Not a sentence I thought I’d ever write, but things change quickly in football.
Mark: 7/10
Verdict: Henry is past his best and playing with a fragile knee. Rooney is fresh after being rested at the weekend and so he gets my vote. Who gets your click? Vote below: