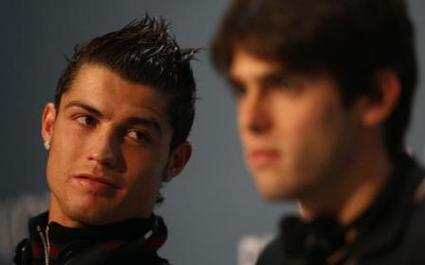 With Kaka set to sign for Real Madrid in the next few days, where does that leave Madrid’s acknowledged No.1 target, Cristiano Ronaldo?
On the face of it, you might think Madrid had chosen one marquee player over another. But with the amazing – and galling – success of rivals Barcelona this season, Real president Florentino Perez is desperate to build a team capable of getting the better of Pep Guardiola and co.

To that end, Perez is willing to spend as much as Â£200m. Â£100m of that will probably be spent on Kaka and Bayern’s Franck Ribery, leaving just enough cash to blow on C-Ron.
In other words, Real want to hoover up any world-class players who they can get their hands on, even if it means spending silly amounts of cash – and all to get back at Barcelona.
Looks like a new team of Galacticos is taking shape, then; Kaka and Ribery don’t have huge egos, but Ronaldo’s is more than “Galactic” enough for all three of them. Whether that works for Madrid remains to be seen. I think it’s a dangerous way to assemble a team – Barca’s current team has taken years to develop, and you can’t just make a shopping list and expect titles to follow.