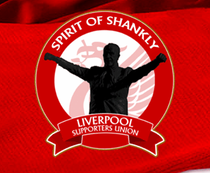 Much consternation in Manchester with the YouTube release of a video shot at the Spirit of Shankly’s end-of-season party, showing people chanting “Munich!” during a singer’s live performance.
Spirit of Shankly (formerly Sons of Shankly) is the self-appointed official supporters’ union of Liverpool FC. Self-righteous, much?
As I wrote in my column for BigSoccer.com, it’s laughable and ironic that this band of staunch Liverpool supporters claims to uphold the good name of Bill Shankly, as the very thought of singing merrily about the Munich air disaster would have appalled Shankly.
Watch the video below…

SoS has quickly issued an apology for the Munich chants, but the damage is done.
Of course, both sets of supporters are as bad as each other, but this time the high ground belongs to United’s fans.
Thanks to Scott @ Republik of Mancunia for the tip. As Scott points out, imagine how much bigger the uproar would be if United fans were filmed singing about Hillsborough – yet singing about Munich is just as bad.