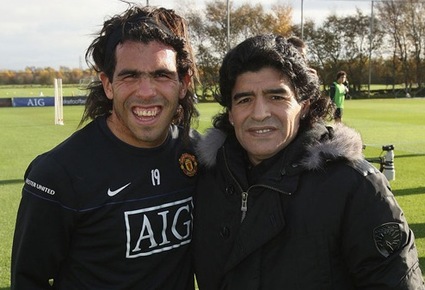 Carlito was delighted when his mum turned up at Man Utd’s training ground
Fergie phoned Tevez this week to assure him that he had a future at Old Trafford. The Argentine’s response can be paraphrased as follows: “It’s a bit f**king late, gaffer!”
Tevez is still hopping mad that he didn’t get to play more first-team football in 08/09. United’s obvious reluctance to buy him outright from MSI hasn’t helped either. So he’s told his people to find him a new club.

Man City are VERY keen on Tevez, and I wouldn’t be surprised if Chelsea and Liverpool didn’t wade in as well. And who knows, perhaps Real Madrid have a spare â‚¬40m hidden in a mattress somewhere?
Even though moving to City is a complete no-no for a United player, I don’t think reasonable United fans would hold it against him for long. 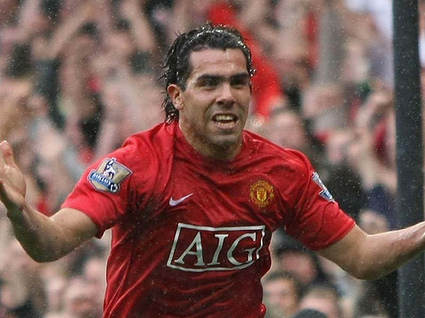 United could really do with keeping Tevez and making him a key part of their first team, rather than an impact player. While I remain slightly sceptical that Tevez is of the absolute highest quality, he’s definitely good enough to start regularly for the champions.
But Fergie’s shoddy treatment of a player who desperately wanted to show his worth will cost him. And if I was a United fan, I’d hold it against the manager. Players like Tevez, who give their all, all of the time, are rare.
To lose one world-class player in a week may be regarded as misfortune, to lose two looks like carelessness.