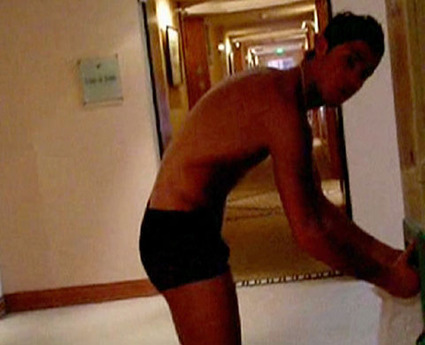 Q. Who’s that wandering the corridors of Moscow’s Crowne Plaza hotel in nothing but his pants?
A. It’s the one United player who you’d expect to find wandering a hotel’s corridors in nothing but his pants.
This short clip (see below) was reportedly filmed on the day of the 2008 Champions League final, in Moscow’s Crowne Plaza hotel (where Man Utd’s team was shacked up) but it’s only just popped up on the YouTube, so I thought I’d share it with you.
No one but C-Ron knows why he was filling a bag with ice -Â if there was a WAG lying naked back in his room, then I would guess he used it to reduce some sort of swelling, perhaps in the groin area.
And did Ronny return after 10 minutes, as promised, to sign an autograph for the fan? Did he heck, as they say up north. Or maybe my cynicism is misplaced, and the Madrid-bound lothario did indeed emerge to delight his corridor stalker.
(That’s two pants posts in a row. Sorry, it won’t happen again.)
Watch the video after the jumpy spider…