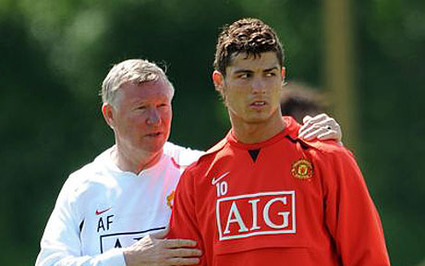 She’s not worth it, son
From the Beeb:
“Cristiano Ronaldo has completed his world record Â£80m move from Manchester United to Real Madrid after agreeing a six-year deal.
“United, who accepted Real’s offer for the winger on 11 June, have confirmed the move has been finalised and he will be presented to the fans on Monday.
“The Â£80m fee for the 24-year-old has been paid in full.”
These are facts, not rumours, people. It’s done, at last. Time for everyone to move on.

“Cristiano has been a marvellous player for Manchester United,” Fergie said, through gritted teeth.

“His six years at Old Trafford have seen him develop into the best footballer in the world.”
You see what Ferguson did there? He took responsibility for turning C-Ron into the player he is today. And so he should. Ronaldo’s natural talent is such that he was always destined to be a great player, but there’s no better place for a young prodigy to develop than under the wing of Fergie.
It’s all sunshine and WAGs now, but wait until some lower-table Liga defender kicks lumps out of C-Ron. Then we’ll see the measure of the man.