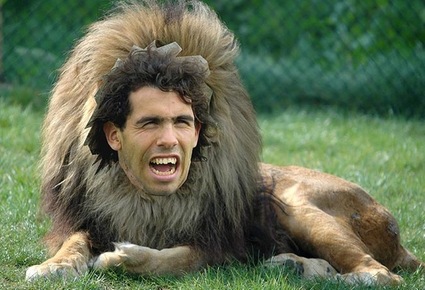 Fergie really hurt my pride (ahem) [Photo @ The Sun]
Wow, if Carlito on a mission to alienate every single United fan on the planet, he’s going about it the right way. In today’s Mirror, he’s credited with the following quote:
“Ferguson still believes I will be at United next season. He thinks I will return. But I know what I want and I know that Ferguson did not respect me as a player.
“Before Berbatov arrived in Manchester, Ferguson told me, ‘You will still be the starting striker, so be cool’. But he lied to me! That is why I know I will not return to United.
“What I want to do next season is score against United. I promise I will not celebrate in front of the United fans but I will shout in Ferguson’s face. You can be sure of that – and it will be one of the most beautiful things I have done in football.”
A lot of fans used to love Tevez, but he’s turning into a whining tosspot before our very eyes. That said, I would pay good money to watch him run up to Fergie and vent all that frustration in the Scotsman’s face.