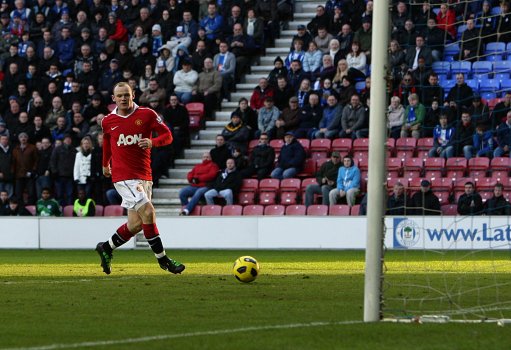 At some point later today Wayne Rooney will discover whether or not he is to be punished by the FA for the cowardly elbow he swung at James McCarthy’s temple during Manchester United’s 4-0 win over Wigan on Saturday.

Rooney’s deep-seated simian aggression reared it’s ugly, pink head once again when McCarthy stepped into his path to impede the United striker’s run, only to receive a glancing blow to the side of the head for his troubles.

Referee Mark Clattenburg didn’t see the incident at the time (to be fair, he had no reason to be expecting a flare-up given the innocuous circumstances) yet still saw fit to give Wigan a free-kick.

As such, should Rooney end up facing a retrospective violent conduct charge after going unpunished during the game itself, Clattenburg will be forced to concoct a plausible explanation as to why he chose to award a free-kick for an incident he clearly did not see when his match report is unveiled by the FA later this morning.

In short, I wouldn’t be overly-surprised if Clattenburg finds himself not getting any of the ‘big games’ for the next week or two.

Even if he is charged by the FA, Rooney could still be available to face Chelsea at Stamford Bridge tomorrow night if he decides to appeal (which is likely, considering he wasn’t booked) against any prospective charge that may come his way – even if it increases the risk of being slapped with an extra match suspension as punishment for a ‘frivolous appeal’.

That said, before Wigan fans attempt to take the moral high ground, it’s worth bearing in mind that Latics captain Gary Caldwell also came close to severing Patrice Evra’s foot from his ankle with an equally despicable challenge…

UPDATE: Word has just come through that Rooney will not face any punishment for mashing his forearm into McCarthy’s face.

The FA have been told by Clattenburg that he feels he administered the appropriate action, which therefore leaves the governing body powerless to launch disciplinary proceedings against the United striker.