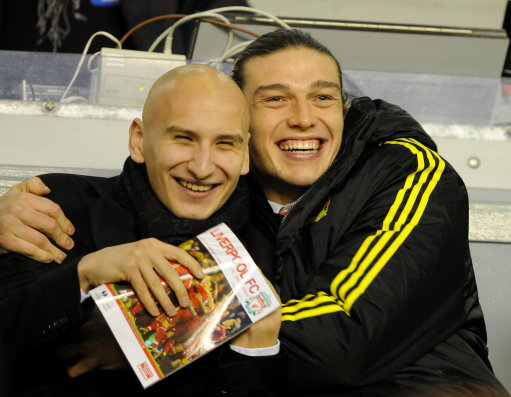 With Boyzone performing in Brighton on Sunday night, Andy Carroll has been freed up to make his Liverpool debut against Manchester United at Anfield on Sunday afternoon after resuming full training this morning.

Carroll, who joined Liverpool at the arse-end of January, has been out of action for the past two months with a thigh injury and hadn’t been cleared to participate in any ‘full contact’ training sessions at Melwood until earlier today – though several newspapers are claiming that the Geordie target man came through the morning’s activities unscathed.

The smart money is now on Carroll to make his Anfield bow at some point this coming weekend – with a spot on the bench now looking almost certain for the most expensive British footballer of all time.

Andy Carroll and Luis Suarez up against a ‘Ferdinand and Vidic-less’ United defence? You’ll excuse me if I just drift off to rearrange my fanstasy league team for a moment…

In further Liverpool team news, Raul Meireles is likely to feature against United despite suffering a ‘small knee problem’ against West Ham, though Dan Agger and Fabio Aurelio are unlikely to be fit and full-back Martin Kelly will definitely miss the game with a torn hamstring.