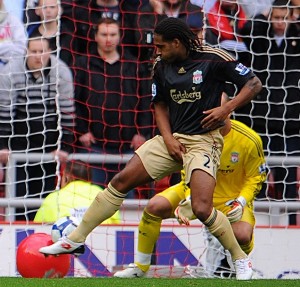 Where do you hide a beach ball?

Easy really – if it’s not inflated you can tape it under your shirt without it being too conspicuous, I imagine. And that’s exactly what I suspect many Man Utd fans will do this Sunday, when Liverpool ‘welcome’ the champions to Anfield.

The Guardian reports this morning that Liverpool staff will be on the look-out for fans trying to smuggle beach balls into the ground; we all know that United fans will be desperate to stage a beach ball-related tribute to Darren Bent’s comedy goal. Anything to wind the ‘dippers’ up – that’s the United way.

Anyway, Betfred is just one bookmaker to be offering odds on the appearance of a red beach ball at Anfield on Sunday.

They go 1/2 about a red beach ball to be on the pitch during play, which seems to good to be true – surely at least one ball will make it as far as the pitch during the 90 minutes, even with stewards watching? Worth a fiver of anyone’s money, I say. Hell, I’d bet on it then turn up with a beach-ball gun, if that’s what it takes to beat the bookies.

They also go 6/4 about Pepe Reina kicking a red beach ball OFF the field of play during the match, which is a much less attractive – though no less amusing – wager.