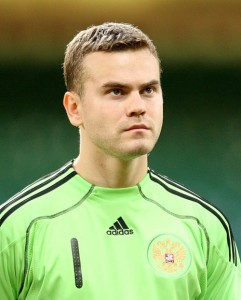 CSKA Moscow and Russia keeper Igor Akinfeev is only 23 years old but he’s one of the most experienced top-level goalkeepers in Europe.

He has been CSKA’s first-choice stopper since he was 17, and was Russia’s first choice at 18.

The word on Football Street is that Sir Alex Ferguson has identified the Russian as the man with the goods to be Man Utd’s next No.1 keeper; it looks very likely that he will sign Akinfeev in January, ostensibly as a replacement for Edwin van der Sar, who is still very good but nearing the end of his fine career.

Akinfeev passed his audition last night with flying colours – after the game, Fergie singled him out, saying he was “outstanding”. Although CSKA lost, to a late Tony Valencia goal, Akinfeev kept the score down with several fine saves, while also showing a fine command of his area. Some say he might have done better for Valencia’s shot. I don’t think so – it was a smart finish and Akinfeev was stranded.

At 6ft 1 in he’s not that tall for a modern keeper, but he’s very athletic for his size and physically solid in a crowded box too. And his experience for his age is unmatched – Fergie would be buying a proven international, yet also someone young enough to remain United’s first choice for a decade.

The next Peter Schmeichel anyone?