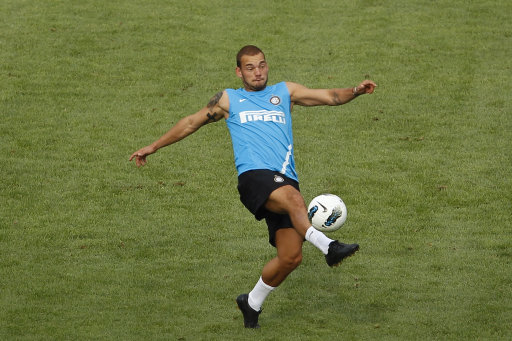 Just look at him, the dirty flirt!

Wes Sneijder has been busy this morning, cork-screwing his metaphorical dagger into the hearts of thousands of Manchester United fans across the globe by regaling Dutch daily AD with tales of just how close he came to turning up at Old Trafford over the summer:

“I just felt that it was close, yes [I thought I was going to join Manchester United]. We had several talks, the situation was such that Inter had to sell a player, Eto’o or me, and indeed there was interest.

“They [United] are one of the biggest clubs in the world, so it did not seem a bad thing – but at the same time I do not want to leave Inter.”

“Italy is great for me. For me a move was not an absolute must, and there were a few things which meant it did not happen.”

“For me it was not so much a financial issue, my feeling was that I was simply feeling very good at Inter, I love the club but also the Italian culture and the people, it fits me.”

“No, Alex Ferguson and I have never spoken, so far…”

Just so you know, those last three dots were added for dramatic effect.