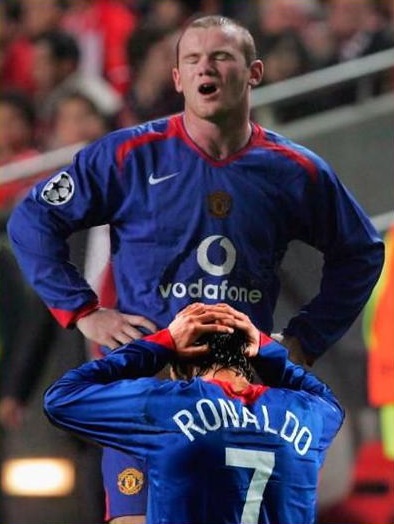 C-Ron’s Madrid dream isn’t exactly turning into a nightmare, but it seems he’s beginning to realise just how good he had it in England.

For one thing, it seems he misses his frutiful partnership with Wayne Rooney (yeah, any sorry-ass excuse to repost this picture). He told the Sun how much he’d love it if Roo joined him at the Bernabeu:

“Wayne would be a sensation out here. I think we could do with Rooney to help us out.

“He would be brilliant if he came. This is the ideal place for the world’s best players and there’s little doubt he is one of them.

“Wayne has all the skill and determination you need to make a fine career here.

“He has shown just how good he is over the last few years in England.

“And there’s no doubt he would be the same sort of player in Spain. It would be lovely to see him here one day at Real Madrid.

“I realise it would take a lot for him to move from England.

“He loves the country, he loves Manchester and he is a Liverpool boy. And United is a good club for him. But you never know what could happen in the future.”

Okay, Ron is just saying what you’d expect him to say – he’s not gonna say Wazza is a donkey who isn’t good enough for Madrid – but I do think he misses Rooney, on the pitch anyway.

The pair had such a great chemistry, and from what I’ve seen so far, Ronaldo hasn’t established much of a rapport with any of his team-mates. Of course, it’s still early days for him at Madrid, but he might go the rest of his career and never find a partner as good as Rooney.

C-Ron also admitted that there is more pressure to succeed at Madrid than he felt during his time in Manchester. He said the Bernabeu crowd is “particularly tough”.