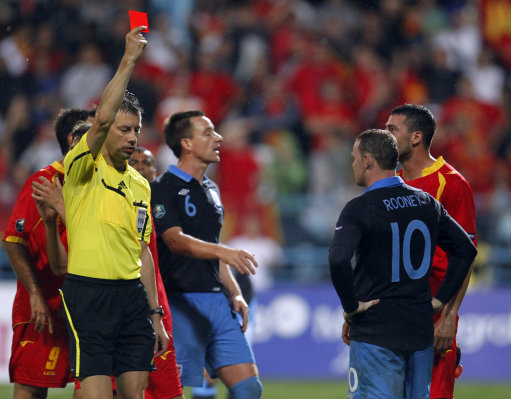 Free the Merseyside One!

Eager to minimise the potential damage caused to England’s Euro 2012 campaign by the loss of Wayne Rooney, The FA have put together a dossier of mitigation to be sent to UEFA.

The FA bigwigs are hoping that Europe’s football governing body will give their star striker a minimum one-match ban after the United hot-head booted Miodrag Dzudovic in the leg last week, and not dish out a two or even three match punishment.

Central to their pleas for leniency will be a letter written by Rooney himself (apparently with no help from an adult) begging for “justice”.

Fabio Capello has also penned a similar letter while a DVD highlighting the fact that Rooney didn’t complain about the decision at the time will also be included in the dossier.

So, Rooney and Co. are asking for leniency because, after kicking an opponent in the leg in an act of utter stupidity, the perpetrator of the act didn’t contest the dismissal? Seems a bit cheeky to me.

FA mouthpiece Adrian Bevington also added (‘on the record’, no less) that Rooney conducted himself ‘incredibly well’ after the game and that he was ‘very apologetic and mature’ – which sounds like a big pat on the back for managing to not kick any other poor bugger over the remainder of Friday evening.