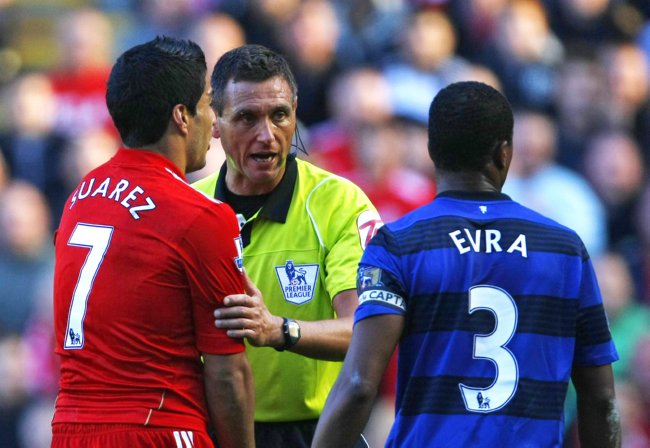 Reports began flooding in at about Match of the Day time on Saturday evening that there had been an ‘incident’ at the end of ‘The Biggest Club Game In The World™’, with Liverpool’s Luis Suarez accused of racially abusing Patrice Evra throughout the match.

This morning, in the same breath, Liverpool have released a statement backing their man and requesting that Evra be damned to the infernal fires of hell if the accusations turn out to be bogus – with the Frenchman claiming to Canal Plus that Suarez had said ‘a certain word’ to him ‘about 10 times’ over the course of the 1-1 draw at Anfield.

“I’m upset by the acusations [sic] of racism. I can only say that I have always respected and respect everybody. We are all the same. I go to the field with the maximum illusion of a little child who enjoys what he does, not to create conflicts.”

You can’t argue with a ‘maximum illusion’, now can you?

Anywho, down to brass tacks. What’s clear is that the pair were at each others throats all game and, allegations of racism aside, were both as bad as each other – diving, feigning, riling and generally trying to get one-another sent off throughout.

Both acted like children, and it’s fairly unsurprising given the rate at which the underhandedness spiralled that the afternoon-long feud between the two eventually transmogrified into something as hulking and ugly as it did – claims and counter-claims of racism.

Either way, the allegations are abhorrent. Racist abuse is, of course, totally unacceptable (especially considering the years of good work that have been invested by various organisations into slowly but surely banishing it from the game – the match itself was used to launch Kick It Out’s ‘One Game, One Community’ action programme, with players from both sides wearing anti-racism T-shirts before kick-off) but a baseless playing of the ‘race card’ in an attempt to smear an opponent is arguably even more vile – should that be the case.

Indeed, Evra’s been caught out before – eventually being banned for four games and fined £15,000 after his claims that he was racially abused by a member of Chelsea’s groundstaff were thrown out back in 2008.

I’m certainly not calling him out as a serial liar, but all the evidence I’ve been presented with has been resolutely inconclusive (especially if the ‘certain word’ is the ‘certain word’ I assume Evra is alluding to), which doesn’t bode well for his claim that the whole shebang was caught ten times, clear-as-day on camera – I’ve seen a couple of passages and I can’t see anything other than two finickety arseholes jostling and bickering with each other all game.

It also doesn’t bode well for the FA investigation that has been launched into the incident, unless the judiciary panel are privy to reams of footage with a vastly greater deal of clarity than that which is available to the peons. From what little I’ve seen, I fully expect this to go the way of 2008.

Is anyone out there any the wiser?