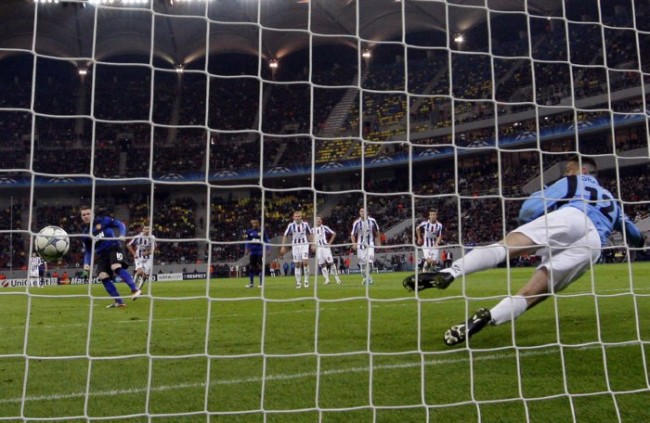 Wayne Rooney became the highest scoring Englishman in Champions League history after sticking away a brace of penalties (Rooney now has 26, having stood level with Paul Scholes on 24) as Manchester United chalked up their first European victory of the season with a bitty 2-0 win over also-rans Otelul Galati in Romania last night.

After a pretty turgid first-half, Rooney finally broke the deadlock from the spot on the 64th-minute mark following Sergio Costin’s flappy handball.

Making his return after a calf injury, Nemanja Vidic saw a harsh but perfectly understandable straight red for cleaning out Gabriel Giurgiu on the touchline with a heavy duty challenge. You can’t help but feel that a yellow would have sufficed, but these things happen – hey ho, Vidic will now miss the remainder of the group stage.

Otelul themselves then went down to ten men as yellow card magnet Milan Perendija picked up his eleventh caution in the space of 13 games for clambering over Javier Hernandez – a yellow which was, unfortunately for him, his second of the night.

As injury time began to wick away, Rooney eventually wrapped up the proceedings from the penalty spot once again, after being chopped down in the area by a knackered-looking Liviu Antal.