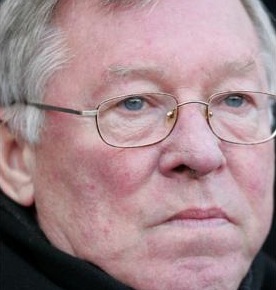 Fergie’s side managed to escape with a 3-3 draw against CSKA at Old Trafford last night, but United’s gaffer was FURIOUSLY angry with the ref’s decision to book Darren Fletcher for diving (Utd were trailing 3-1 at the time).

After the game, the Scot went off on one:

“It was unbelievable. For what reason would a player six yards out even think about that? You can’t appeal a yellow card, that’s the problem.

“In domestic football it could get lost in the system but in European football it is crucial because, later in the tournament, to miss a really important game because of that is unfair. Uefa should look at that, really, but they won’t. It is a really bad mistake. OK, it’s human error but it is still a bad mistake.

“I can’t believe it. I watched the camera by the side of the dugout and it is the worst I have ever seen in my lifetime – unbelievable.”

I must admit I didn’t see the incident (Arsene Wenger, take note), but I hear that it wasn’t a dive, though Fletcher did overplay the contact by waving his arms.

Did you see it? Did Fletcher deserve his yellow?

Oh, and pics of the game below: