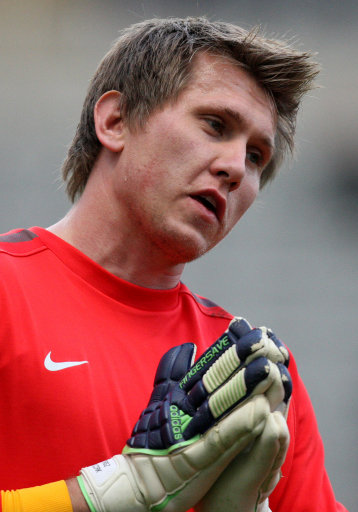 Kuszczak begs for his freedom

Poor old Tommy Kuszczak –  the Polish goalkeeper has slipped down the pecking order at Manchester United, and now finds himself behind David De Gea, Anders Lindegaard and even Ben Amos.

Eager to stake a claim for a place in the Polish squad for the Euro 2012 finals, Kuszczak was hoping to move to Leeds United on loan until the end of year, but according to the 29-year-old, Sir Alex Ferguson blocked the move.

“I’ve become a slave to Manchester. I’m frustrated but I don’t want to slander or criticise (Sir Alex) Ferguson. It’s not my style, ” said the ‘keeper. “I’ve talked to Ferguson recently. I asked him to let me leave the club now, before the January transfer window.”

“I told him I want to play and get back into the national team, because Euro 2012 is just around the corner – but it seems he doesn’t care, ” he continued. “The possibility of a two-month loan to Leeds United

came up two weeks later. The club blocked it.”

“It was a glimmer of hope for me. It would have reminded the Poland manager about me – but I didn’t get the club’s approval. I have respect for Ferguson because, for me, he’s a great manager, but I hope he will let me go in January.”

His frustration is understandable, but once again the use of word “slave” is ridiculously inappropriate. Earning around £30,000 per week for not playing football does not make you a slave.