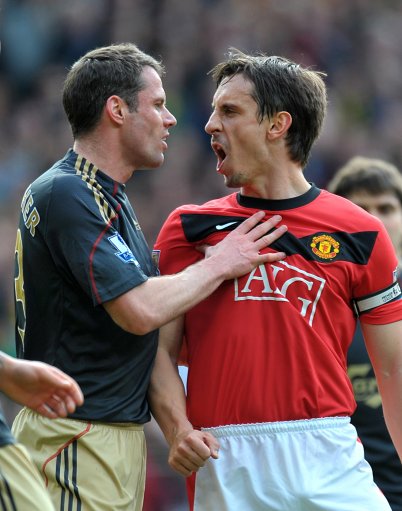 Famous Scouse-hater and Mancunian legend Gary Neville once said “I can’t stand Liverpool, I can’t stand the people, I can’t stand anything to do with them,” the kind of unbridled malevolence which has made the former United and England star something of a hate figure on Merseyside (not surprisingly).

However, on a recent recording of the rather mediocre Sky panel show They Think It’s All Over, tubby host James Corden actually did something genuinely funny and revealed to Neville that he, of all people, had Scouse blood coursing through his veins courtesy of his great, great, great grandparents ,who themselves came from Liverpool.

Corden even brought out a Liverpool jersey for G-Nev to hold, although the Sky Sports pundit did refuse to do so. Maybe next week they’ll shock us all and out Jamie Redknapp as an eloquent, sophisticated human being.

The episode in question was screened on Friday evening. Take a look for yourself.