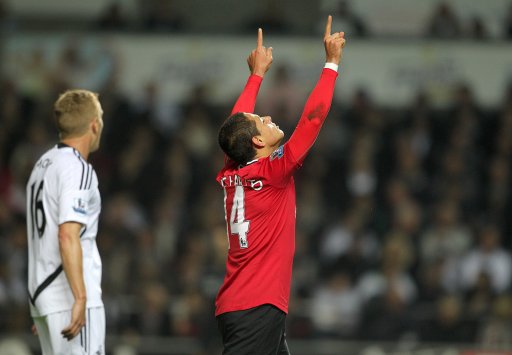 Manchester United secured their third 1-0 win in a row in the league on Saturday, overcoming an impressive Swansea Side at the Liberty Stadium.

Brendan Rogers’ side have impressed in their maiden Premier League season, playing a brand of elegant attacking football which has surprised and entertained in equal measures.

United once again failed to dominate the game, with Nathan Dyer in particular giving Patrice Evra a difficult time down Swansea’s right flank. However, ultimately it was that famed ability to eek out a result in a tight game which would give the visitors victory, with the predatory Javier Hernandez converting on 11 minutes after Ryan Giggs had robbed the ball of the usually reliable Angel Rangel.

Fergie’s men stay five points behind City but will surely need to find another gear if they are to push their more affluent, noisy neighbours all the way this season. The Swans, on the other hand, can be proud of another graceful, if ultimately unfulfilling, performance