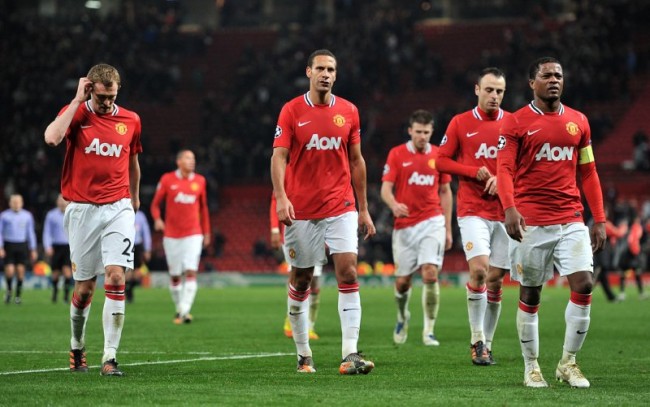 Manchester United will go into their last group stage match needing to snare at least a point against Basel to make it through to the knockout stages after flapping their way to a draw against Benfica (who qualified themselves as a result) at Old Trafford last night.

With Wayne Rooney pulling out with a hip problem shortly before kick-off, United fell behind in the third minute when Phil Jones volleyed home Nicolas Gaitan’s cross past David De Gea, before Dimitar Berbatov equalised on the half-hour mark with his first Champions League goal in nigh-on three years – turning home Nani’s flighted centre by steering a lovely near-post header across the goal.

Darren Fletcher then had United 2-1 up in the 59th-minute, prodding the ball past Artur at the second attempt before Pablo Aimar hauled Benfica level again less than a minute later, clouting in from close-range following a duff kick from De Gea.

Sir Alex may well have stomped out of his post-match presser after taking umbrage at a reporter’s suggestion that United have ‘struggled in Europe’ this year – but in all honesty, it’s all been a little bit sloppy hasn’t it? Especially taking into account last night’s evidence.