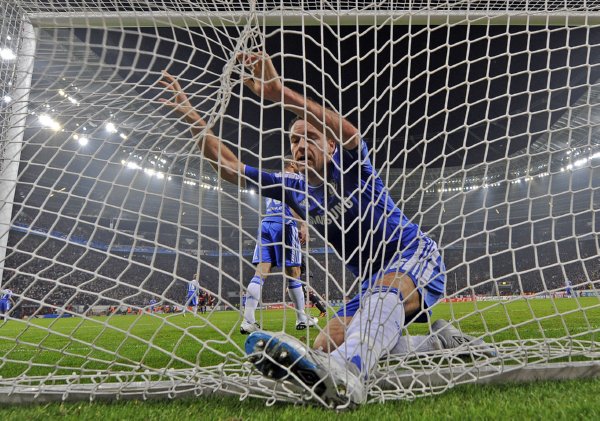 With precious little margin for error, Manchester United, Manchester City and Chelsea are all left needing specific results to fall into their lap to progress, with many online gambling companies offering fairly tempting odds on a complete, three-way Anglo-centric balls-up.

After stocking the Champions League with exactly half of it’s finalists over the course of the past seven years, there is a very real possibility that the Premier League could be left with one sole representative in this year’s tournament come tomorrow night, with Arsenal the only English club to have ensured themselves a place in the knockout phase as we wade into the last round of group games.

First up, with the two teams level on points in Group E, Chelsea will take on Valencia at Stamford Bridge later tonight knowing that a win is the only outcome that will definitely take them through, following Bayer Leverkusen’s final-minute parade/urination act the last time out.

Didier Drogba, seen here after trying to get his head around the next two paragraphs

Seeing as ‘head-to-head’ records will take precedent over goal-difference in the final standings, the other permutations are as follows:  If Leverkusen beat Genk (who are already out), a goalless draw would also be enough to see Chelsea through courtesy of Frank Lampard’s away goal in their 1-1 draw at the Mestalla back in September.

Any scoring draw would take Valencia through at the expense of Chelsea on goal difference, but if Genk (who have scored one and conceded 15 goals in five games as is) manage to beat Leverkusen, both the German side, Chelsea and Valencia could all finish on nine points if the latter two draw – which would mean that it would have to be a goalless draw to take Chelsea through due to their superior ‘head-to-head’ record against Leverkusen (2-0 home, 2-1 away).

Given all that rigmarole, it’d be better a lot easier on everybody’s frayed, misfiring synapses if AVB’s mob just managed to squeak out a win – that said, Valencia are unbeaten in their last four visits to England. Make of that what thou wilt. On Wednesday evening, United travel to Switzerland to face FC Basel with a one-point advantage over their opponent’s in the Group C pile, thus needing only to stave off defeat on the night in order to seal themselves a spot in the knockout stages – which may not prove to be quite so straightforward, especially given that Basel gave them the run-around in the first fixture, which ended 3-3 at Old Trafford back in September.

Benfica go into the final game level on points with United at the top of the table, but the Portuguese side have a superior ‘head-to-head’ record against both Sir Alex’s side and Basel meaning they are already through. However, they can (and probably will) go through as group winners if they manage a win at the Estadio da Luz against Romanian also-rans Otelul Galati who are, quite literally, pointless. As for City, they look, for all intents and purposes, pretty much buggered. Roberto Mancini’s side are a point behind Napoli in Group A with a worse ‘head-to-head’ record thanks to a 2-1 defeat in the San Paolo a fortnight ago, and will square off against comfortable group winners Bayern Munich tomorrow knowing they simply must win and retain faith in Villarreal either beating or holding Napoli to a draw.The Spaniards have lost all five of their games so far.

As I say; ‘Pretty much buggered’ – though stranger things have happened at sea.

So, the question goes out: Which way do you see it going over the next two nights of European football Pies’ fans? Personally, I’ve had a little flutter on only Chelsea going through and both United and City biting the big one – chiefly because Gab Marcotti told me to in his hushed Italian-American tones after the Chelsea/Leverkusen game. In Gab I trust!