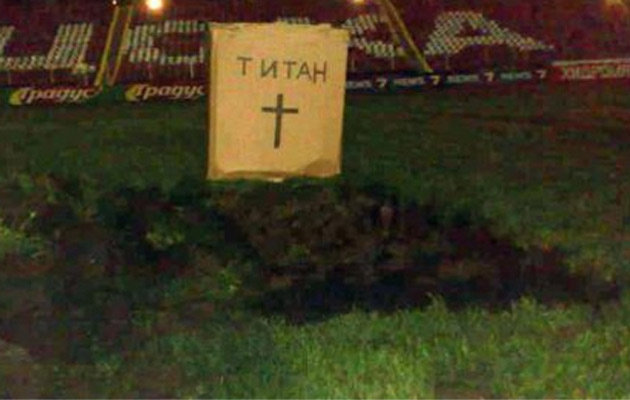 A group of hardcore CSKA Sofia ultras have delivered a morbid message to the company controlling their club by digging a shallow grave, complete with headstone, in the middle of the pitch at the Bulgarian Army stadium.

The cardboard headstone displays the name “Titan”, which is the company (a Bulgarian firm who specialise in waste management) who own CSKA and have been repeatedly targeted for abuse and protests by supporters for their perceived mismanagement of the club since taking over in 2008.

The pitch was apparently repaired on Wednesday, though the photo of the grave above circulated on internet forums, Facebook, Twitter and the like, accompanied by the caption “Five years is enough. Titan means shame”.

The fans have a point. Indeed, CSKA are in dire financial straights this season and only last year weaseled out of a three-year ban from European football after UEFA decided to investigate their debt situation a little more intently.

(Image via World of Sport)