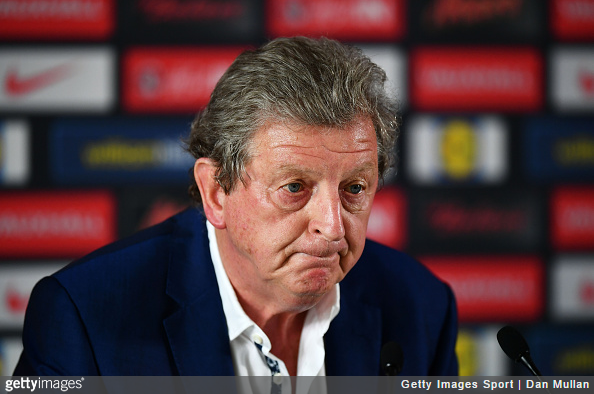 Having ducked the media directly after his insta-resignation last night, former England boss Roy Hodgson finally emerged in front of the hack hordes for a cheery farewell press conference on Tuesday afternoon.

Hodgson appeared alongside FA chief executive Martin Glenn (who wasted little time assuring everybody that he “isn’t a football expert”) but denied that he was doing so under duress, instead claiming that he wished to uphold his record of having never shirked a presser before.

Remarkably, the very first words that came out of Hodgson’s mouth were ‘I don’t know what I’m doing here’ and he plowed on in a similar furrow from there. Indeed, it quickly became obvious from his tone that Roy had assumed his farewell statement after the full-time whistle in Nice was going to suffice.

I was told by everyone it was important I appear here because people are smarting from our defeat. I suppose someone has to stand and take the slings and arrows that come with it.

I’m disappointed. I didn’t see it coming. I had no indication that we were going to play that badly. I’m still recovering from what happened.

We go home as losers in the last 16 and retain that wretched record of not winning a knock-out game in the tournament.

Here are a hand-picked selection of other pertinent quotes to arise from Hodgson’s official last stand (quotes via BBC Sport):

I don’t really know what I’m doing here, I’m no longer the England manager but I was told to come.

I suppose someone has to come and take the slings and arrows… my emotions are the obvious ones. I’m very disappointed, I didn’t see the result coming.

If you don’t turn up and play the football that you know you’re capable of, an opponent like Iceland can beat you. I’m still recovering from that, it wasn’t a good night and I’m very fragile.

We believed that we could get to the quarter-final and get beyond that.

The focus of inquest inevitably soon turned to the nature of England’s performance against Iceland:

As a manager, I am responsible so it’s not about transferring blame to the players.

We feel very sad we couldn’t deliver what we wanted to deliver.

Of course we are sorry we couldn’t give the results we were hoping for. There is not much more I can say on the subject.

Then came the obilgatory ‘there’s always next time’ chestnut:

I’m sure these players will live up to expectations and one day I’m sure we’ll see England do well in a tournament, I’m hoping in 2018.

It is a difficult job. It is not an impossible job.

It is getting easier because there are more good young players coming through.

Hodgson also batted away claims that several unidentified senior England player had questioned some of his decisions during the tournament, notably his decision to recall Raheem Sterling for the Iceland palaver.

It it’s true then they disguised it well from the players and coaching staff.

The game you are talking about against Slovakia we dominated from start to finish. The only problem was our failure to take chances.

For the record, Wayne Rooney has also emitted a short statement to deny the claims, telling the Press Association: “In response to recent media reports, I’d like to say that is completely untrue”.

Hodgson then signed off with one final response:

I have no complaints about the way I’ve been treated and I do understand that there will be criticism but it’s a fact of life.

One particularly bad game has caused a lot of damage to me, the team and the team going forward because they’ve got a bridge to repair.

Non-football expert Glenn then ended proceedings by fielding a salvo of questions about Hodgson’s replacement, to which he replied:

We will be looking for the best person for the job. We are absolutely not ruling one out.

I am not here to talk about names today but I have been consistent with this, saying we will have the best people in the world to take this exciting group of players with high potential forward.

We are looking for the best person, not necessarily the best Englishman.