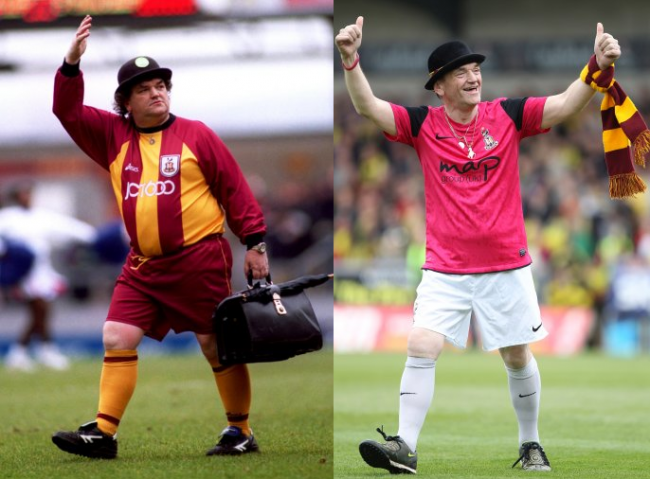 Having fulfilled the role for the last 19 years, the man who served as Bradford City’s “City Gent” mascot has spoken of his heartbreak after being forced into hanging up his bowler hat, brolly and briefcase after the club deemed him to not be “portly” enough for the job anymore.

Lifelong Bantams fan Lenny Berry has portrayed City Gent at Bradford games since 1994 after being spotted working in the player’s bar at Valley Parade by former chairman Geoffrey Richmond and being deemed the perfect stature.

However, over the past few years Berry has dropped seven stones in weight after being diagnosed with diabetes, and now the club have informed his that “his appearance no longer matches the original concept”. The Bantams did offer Lenny, 59, the option of donning a padded “sumo” suit under his kit to keep up the illusion of flab, but he politely declined.

He told the Telegraph and Argus:

“I don’t want the club getting hurt, I love the club. If you cut me open I’d be claret and amber. It’s not the team and it’s not the club, but I am disappointed with the way it’s been dealt with.

“In a meeting I asked why it wasn’t brought up six years ago when I first lost the weight. They said they knew about my health issues.

“Obviously I’ve lost a lot of weight. I used to be 17 and a half stones, whereas I’m now around ten and a half. I lost it in about 18 months after I found out I had diabetes.

“I used to have supporters chant things at me, like ‘who ate all the pies’. I used to get them going and then grab my belly. I play the part of the mascot though, through my face and my eyes. I’ve always had a good rapport with fans”

Bradford director Roger Owen said the issue had been discussed at a board meeting just after the end of last season, and that he felt the club had given Lenny a perfectly adequate compromise:

“In the case of The City Gent, the main issue was his physical appearance, which was much changed from the original concept of the then-chairman, the late Stafford Heginbotham, who styled the City Gent on himself.

“It was…agreed that Lenny be formally contacted, by letter, to put our various points to him and to suggest that the club obtain a Sumo-type suit with character head piece to represent the Gent.

“The Football League had told us at the time of the League Two Play-Off final that only animal or human mascots were now appropriate if they wore an anonymous headset.

“Lenny was given a deadline to respond, which was extended and then not complied with by our meeting on Friday…Lenny advised me that he would cease his role as City Gent with immediate effect.

Judging by the reaction Lenny’s redundancy has stirred up on Facebook, etc, it seems that he’ll be sorely missed – especially by the kiddiwinks – at Valley Parade. It seems he’d become, in the best possible sense, part of the furniture there.

Still, a concept is a concept. Word on the wire is that John Goodman has already been approached to take on the role.