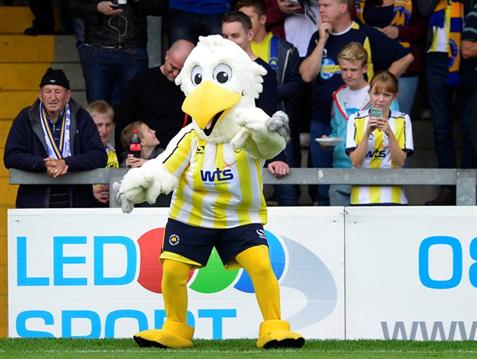 Torquay United have been forced into giving their club mascot, Gilbert the Gull, an official warning over his conduct after he found himself embroiled in conduct “not befitting a friendly Gull”.

United’s mascot reportedly let several choice expletives fly in an argument with several fans during Torquay’s defeat against Grimsby at Plainmoor on Saturday.

Gilbert has since been reminded by club officials that ‘he should be seen and not heard’ following an investigation into the incident by Torquay chief executive Andrew Candy.

“There was an exchange of views between Gilbert and the fans in the Popside (stand).

“Gilbert was trying to generate some support and get the fans behind the team but it appears that there was a small altercation with the fans.

“There was no malicious intent in what was said but things were said that, in hindsight, should not have been.

“Gilbert has been spoken to and been told that this should not have happened and that this will not happen in the future.”

According to posts on a United fans’ forum, the slanging match began toward the end of the game when Gilbert, who is supposed to stay stationed in front of the Family Stand, attempted to rally fans in the Popside with the home side 2-3 down.

If you’ll excuse the miserable pun, it was at that point that feathers started flying.

“Gilbert has been made aware that he shouldn’t allow his enthusiasm to take wing and fly over to the Popside,” Candy added.

“It was near the end of a game that we were losing and emotions were running high.

“Now that everything has calmed down, Gilbert will now be back where he should be and that is keeping the younger fans entertained.”