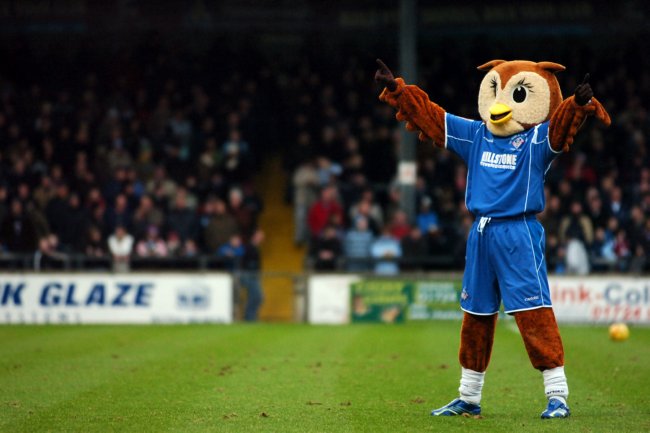 Owl abuse in football is a serious issue. Only last year did we see a poor, defenseless hooter kicked to death during a game by Deportivo Pereira defender Luis Moreno.

Moreno was fined and given community service in a zoo. The owl was mushed up, beak and all, and sold on as ‘C-Grade Unclassified Meat Product’ for use in the doner kebab industry while his two little owl-lets had to be sat down and told that Daddy wouldn’t be coming home. Ever.

Thankfully, the emotional uproar caused by Moreno’s callous actions seemed to eradicate owl abuse from our beloved sport…that is, until now.

Oldham Athletic mascot Chaddy The Owl (who was, I think I’m right in saying, the fastest mascot in Britain at one point) was posing for a picture with a young fan during a recent match against Preston when he was suddenly punched square in the face by a fellow Latics supporter.

Chaddy himself described the harrowing ordeal to the Manchester Evening News:

“I was posing for a fan when out of the corner of my eye I saw this guy coming towards me. I didn’t recognise him and he hit me. He then just walked off to a group of mates and went to the bar.

“There were stewards there but I don’t know if they saw it. The stand was packed though so there were a lot of witnesses. I was alright but the kid I was with was a bit shocked.

“I don’t even want him banned because we need as many fans as we can get. I just want an explanation and an apology.”

Such bravery, such valour.

You’ll be glad to know that Oldham officials have started an investigation and hope to acquire CCTV footage from Preston in order to find the assailant.

As little as £2 a month could go a long way to helping eradicate owl abuse from football altogether and help make scenes like this a thing of the past.

Please, donate all you can afford into my personal bank account and I’ll personally make sure that all the funds are forwarded to worthy causes.