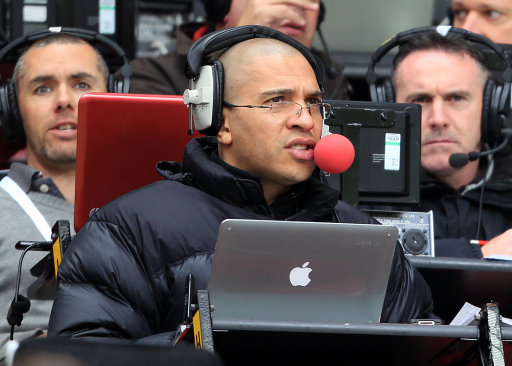 Small-scale pundit warfare erupted on Twitter last night in the wake of Diego Costa’s dismal efforts to con a penalty out of referee Michael Oliver by hurling himself over Burnley goalkeeper Tom Heaton at Turf Moor – with Stan Collymore ultimately vowing to walk away from the broadcasting profession to prove his point.

Having witnessed Costa going arse-over-tit and guffawing disdainfully like the rest of us, Collymore took to Twitter to predict that the Sky Sports pundits (Gary Neville and Jamie Carragher) would side with Chelsea’s Spanzilian striker due to their past allegiances with a couple of modern football’s more renowned tumblers…

Fully expect most pundits to say pen at half time as they either cheated by diving themselves or played with Suarez and Ronaldo.

While discussing the Costa dive live on air, Neville then commented that, in his own experience, every single player in the Premier League era had “gone to ground easily” to win a foul at one point or another. This riled Collymore, who issued Nev with a challenge…

I’ll stick to the original offer @GNev2! I never ever tried to win a free kick, pen anywhere on the pitch by diving or pretending. Ever.

The pair then hammered out the details of the wager, with Neville saying he’d need a few days and a couple of “Sky anoraks” to help him go through hours of archive footage.

The ex-Manchester United defender then added a further forfeit to the mix, telling Collymore that he will also have to don a United shirt with ‘Neville’ on the back and dance around Liverpool singing “Gary Neville is a Red” at the top of his lungs if a clip of him “going to ground” was successfully located!