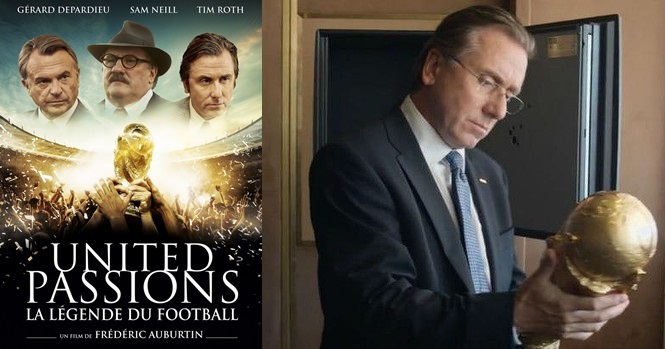 No doubt you’ve done your utmost to erase it from your consciousness entirely, but last summer saw the self-funded FIFA movie, United Passions, bomb spectacularly at the box office by running at at loss of around $30million after its opening weekend.

Despite a relatively stellar cast (Tim Roth as Sepp Blatter, Sam Neil as Joao Havelange and Gerard Depardieu as Jules Rimet) and a vast production budget, the movie turned out to be exactly the kind of expensive gilded turd that every right-minded person expected it to be.

Nattering away during an ‘Ask Me Anything’ session over on Reddit, Roth freely admitted that he loathed playing Blatter on the big screen and that he only signed up to the project to make a bit of quick, easy money.

The film is awful. I hated doing it, it was the wrong film but for the right reasons.

I had two kids in college so I had to make a decision and it was probably poorly judged, but once you make that decision you have to follow through.

It’s a hard road, being in something you don’t want to do, but I’m glad I did it for my family.

We guess the one saving grace as far as Roth’s integrity as an actor is concerned is that absolutely nobody saw United Passions anyway.

Anyway, discussing the project further, Roth added that he initially took the role as he assumed the film was going to be an expose of the corruption within FIFA’s corridors of power.

Of course, it wasn’t. It was a tacky pro-FIFA propaganda puff-piece from start to finish.

As for FIFA, I thought the movie would be much more about the corruption of this guy at first.

I don’t know if he is going to go down, he seems to have survived everything that has been thrown at him.

There doesn’t seem to be any way you can get to them because of all those big corporations behind him.

It looks the most promising though now though, it looks like he is a on a back foot now because he looks more exposed then he has ever been in the past.

Every cloud, and all that.