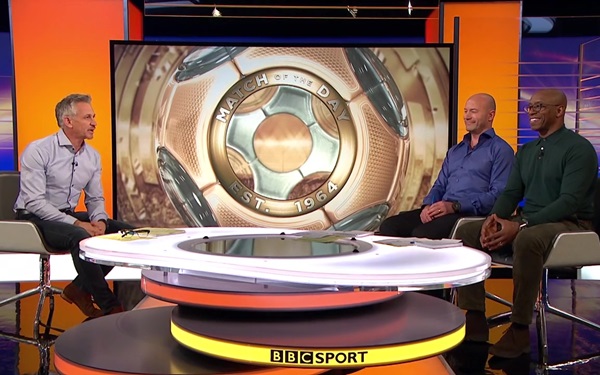 “Promise not to giggle, lads?”

Gary Lineker has admitted that he is having second thoughts about his vow to present Match of the Day in his underwear if Leicester City go on to win the Premier League title.

Back in December, with Leicester in the early stages of their monumental run of results, Lineker emitted a Tweet vowing to anchor the programme wearing nowt but his shreddies if his boyhood club went on to do the unthinkable.

Now, with the Foxes just three points away from sealing the deal, he’s starting to get a bit jittery, telling the Radio Times:

The conversation’s been had. I’ve told [the Match of the Day producers] many times, ‘Please tell me I can’t do it’.

When I sent the tweet in December, I categorically knew there was zero chance that we would win.

I’m in good shape. For an old b*****d. I’ll probably work out for the two weeks beforehand very, very hard.

Lineker then echoed those sentiments in a follow-up natter with the Independent before attempted to insert a retrospective caveat that he never actually promised to present the entire show in a semi-nude state:

I certainly never said anywhere in that tweet that I would do the whole show.

Not that we’re particularly hankering to see Lineker in his unmentionables, but still – what a wet lettuce.