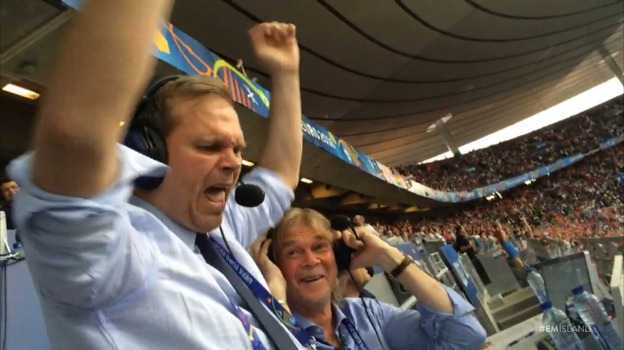 Despite providing one of the most enduring moments of Euro 2016, it would appear that all is not going overly well back home for Gudmundur Benediktsson, i.e, everybody’s new favourite manic Icelandic commentator.

Benediktsson was thrust into the spotlight when Iceland squeaked their way into the knockout rounds with a 94th-minute winner against Austria, as accompanied by the Siminn TV pundit and his impassioned whelps of pure, unbridled ecstasy.

However, with that fateful day in Paris now but a blissful memory, Benediktsson has received word from back home that he will not have a full-time job to return to once his media duties come to an end in France.

Indeed, the 41-year-old, himself a former Iceland international, has been unceremoniously relieved of his duties as assistant coach at KR Reykjavík.

The club broke the news with a short statement posted on their website in which they announced that Benediktsson (along with head coach Bjarni Eggerts Gudjonsson) had been let go after a season of “unacceptable performances”.

Way to put a down on everything, KR Reykjavík.

For cying out loud, could you not have at least waited for the man to get home?