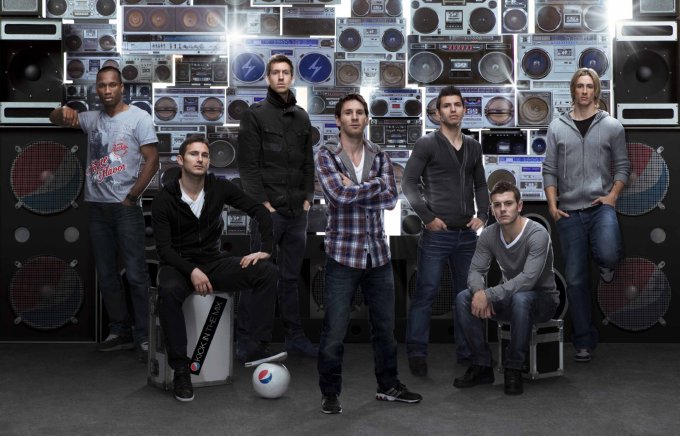 Introducing Pepsi MAX’s awful new boyband, from left; The One with Awful Hair, The Chunky One, The Tall One, The Halfling, The One with The Cardigan, The Invalid and Brian McFadden

Looking like the stuff of Simon Fuller’s nightmares, Pepsi MAX have thrown Didier Drogba, Frank Lampard, Lionel Messi, Sergio Aguero, Jack Wilshere and Fernando Torres together with pineapple-wielding Scottish DJ Calvin Harris to form what will no doubt go down in history as the world’s worst boyband – hang on, I forgot about Another Level – the world’s second worst boyband.

The project is called ‘Kick In The Mix’ and will basically see Harris providing the soundtrack for the advertising campaign while Pepsi’s stellar list of footballing talent do assorted and interesting things with footballs in the foreground.

Thankfully, Drogba (or any other of the players for that matter) will not be allowed near the microphones at any stage. At least he shouldn’t be, not if his radar-jammingly high-pitched rendition of ‘Heard It Through The Grapevine’ is anything to go by…

Apologies to those of you with dogs in the room.