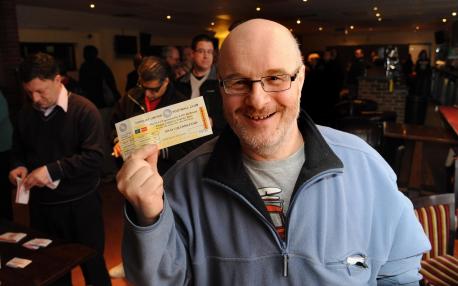 Never short of a cheeky word or two himself, Crystal Palace manager Ian Holloway recently found himself on the receiving end of some fan abuse at a friendly away at Crawley Town.

According to the Brighton & Hove Argus, Red Devils’ fan Paul Prendergast spent most of Staurday’s friendly hurling abuse at Holloway from the stand behind the dugouts, with the Eagles’ boss eventually losing patience with the Crawley fan.

Holloway complained to nearby stewards and the upshot of it all is that Prendergast has been banned from his beloved team’s next four home games. On hearing of his punishment, Prendergast resigned from his position as  chairman of the Crawley Town Supporters’ Alliance. Ian Townsend, the Alliance’s spokesman said:

“Paul has been sat in that same seat behind the opposition manager for the last 16 years and to be honest he does tend to wind them up mercilessly.”

“On Saturday he could see that Ian Holloway was getting hot under the collar when Palace started losing so he started making some observations about the quality of their team.”

“Some other fans might have been ribbing Holloway about his West Country accent but that wasn’t Paul.”

“The problem was that he worked out which button to press, pushed it and then wouldn’t remove his finger – until it all went wrong.”

Prendergast should now expect to receive a whole load of queries from Premier League club fans up and down the country about just what it was that pushed Holloway’s buttons. What dark arts did Prendergast practise on Saturday? Any suggestions folks?