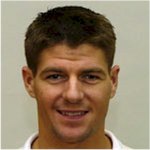 Paul Robinson Stood around for 90 minutes watching his team-mates huff and puff in Andorra’s half. 6/10
Micah Richards Not the most stylish player but enthusiastic and got forward when he could. Stuart Pearce will be gutted that he left the pitch on a stretcher. 6/10
John Terry Found himself in some advanced positions but couldn’t offer much in attack. Untroubled at the back. 6/10
Rio Ferdinand Had a quiet night with virtually no defending to do. 6/10
Ashley Cole Had a real chance to maraud down the left wing and overlap Stewart Downing, but blew it. Has to sort out his temper too – every time the camera does a close-up on his face, it’s twisted angrily into some moan or other. 5/10

Owen Hargreaves Busy, committed, effective when sweeping up, rarely wasted possession. Gave Gerrard the freedom to roam. 7/10
Steven Gerrard Played as if he was wearing the captain’s armband. Should be too. Two beautifully taken goals capped a man-of-the-match performance. 9/10
Stewart Downing Saw a lot of the ball but didn’t do much with it. Doesn’t have enough pace or skill to cut it on the wing at international level. 6/10
Aaron Lennon Sometimes he seems too quick for his own good, but he brings a lot of energy and devastating pace to the team. 6/10
Wayne Rooney Andorra targeted his suspect discipline and he never looked settled. Dropped too deep too often. Not his finest night and was rightly taken off. 5/10
Andy Johnson Much more comfortable playing where he does for Everton (funny that). Some nice turns and did enough to keep his place. 6/10
Subs:
Kieron Dyer Looked lively and inventive but fluffed two great chances.
Jermain Defoe Nice lay-off for Gerrard’s second goal and will be gutted not to be credited with England’s third.
David Nugent Didn’t seem overawed and set-up Dyer with a neat pass, but very lucky to get a goal on debut.
Agree with our ratings or think we’re talking more baloney than Stevie Mac? Drop us a comment with how you saw the gameâ€¦