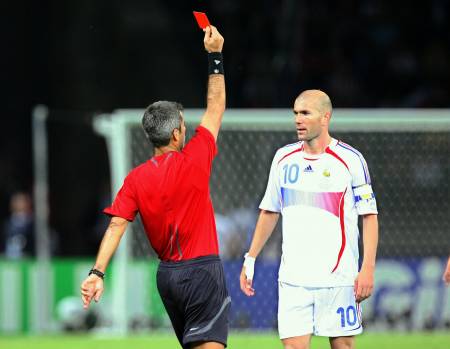 Zinedine Zidane has vowed to never apologise to Marco Materazzi for the headbutt he expertly dispatched to Italian’s chest during extra time in the 2006 World Cup final.

The now-infamous assault was seen by many as a shameful end to a glittering career for the French legend and whilst ‘Zizou’ admits to feeling remorse for the incident itself, he has no such contrition for his protagonist and made his feelings about ‘The Matrix’ perfectly clear in an interview with El Pais magazine;

“Of course I reproach myself, but if I say ‘sorry’, I would also be admitting that what he himself did was normal, and for me it was not normal. It is not an excuse. But my mother was ill. She was in hospital. This people did not know.

They insulted my mother and I never responded. But there [the headbutt] happened.

I apologise to football, to the fans, to the team… After the game, I went into the dressing room and told them, ‘Forgive me. This doesn’t change anything. But sorry everyone’.

But to him [Materazzi] I cannot. Never, never…it would be to dishonour me…I’d rather die. If I ask him forgiveness, I lack respect to myself and to all those I hold dear with all my heart.”