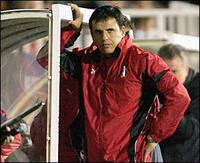 Pies will miss Cookie Coleman. He has lovely shiny hair, big manly thighs and a finely tuned sense of humour. He’s also a damn good manager and despite Fulham’s poor form I didn’t get the feeling that his time at Craven Cottage â€“ ten years of sterling service, as a player and manager â€“ was coming to an end.
That said, I actually think Mo Al-Fayed and the Fulham board have made a brave decision. Despite Fayed’s critics, he has been very loyal to Coleman, but the bald fact is Fulham simply can’t afford to be relegated: the club doesn’t have a big enough fanbase/bankroll to challenge for promotion season after season. If they do go down, who knows how long it might take for them to play in the top flight again?

Lawrie Sanchez now has a five-game honeymoon period in which to pick up a couple of wins and I believe he is good enough to do that. Nothing less than survival is good enough; indeed, most Fulham fans would tear your hand off if you offered them 17th place right now. I think they will survive.
For Coleman, a new chapter in his career now begins. Plenty of clubs will be keen to employ him, and it will be interesting to see where he ends up next season. Leicester City, anyone?