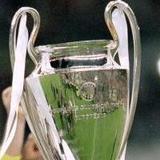 England 3-1 Italy. That is the makeup of this season’s Champions League semi-finals. No representatives from Spain, Germany or elsewhere. So of Manchester United, AC Milan, Chelsea and Liverpool, where will you be putting your money? United are in scintillating European form judging by Tuesday night; Milan shouldn’t be in the competition but their quality is obvious to see; Chelsea are peaking at the right time and Liverpool progressed comfortably and only have the Champions League to concentrate on. Who’s going to win the thing?
[Rob Parker]