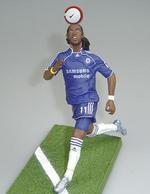 DIDIER DROGBA TO SCORE FIRST FOR CHELSEA AGAINST BLACKBURN (4-1)
Blackburnâ€™s rugged approach to life should be ideally suited to defending against big powerful players. If it is then no one has told Didier Drogba. The Ivorian has scored each of the last three times he has started against Mark Hughesâ€™s men, twice bagging the gameâ€™s first goal. He can do so again.

BOLTON TO BEAT ARSENAL (4-1)
Arsenalâ€™s Bolton allergy is well documented (just one win in nine â€“ for betting purposes anyway, the extra time FA Cup win counts as a draw) and they simply canâ€™t be trusted at odds-on. Big Sam to ruffle Wenger’s feathers again is the value call to a small stake at the prices.
LIVERPOOL (5-6) AND EVERTON (8-11) BOTH TO WIN
Man City have got themselves safe and could easily revert to type against a Liverpool side that was hardly extended in midweek and are still chasing third. And donâ€™t be fooled by Charltonâ€™s mini-revival. They were woeful at home to a weakened Reading side on Monday night and Everton (themselves unbeaten in six) are strong at home. The scouse double pays over 3-1.
READING TO BEAT FULHAM (10-11)
It is a myth that teams with a new manager show immediate improvement (people only remember the good ones) and Reading, who rested players against Charlton, should be too organised and spirited for a Fulham team that becomes a complete shambles when going behind. The bookies have overreacted to Lawrie Sanchez’s appointment and this looks the weekend banker.
SUNDERLAND TO WIN 2-1 AGAINST QPR (7-1)
Sunderland continue to win every match but rather than lumping on at 4-11, try a correct score bet to a smaller stake. Keanoâ€™s boys have scored exactly two goals in seven of their last eight matches and QPR (four wins in five) are good enough with the likes of Dexter Blackstock to grab one at the other end.
[Lee Honeyball]