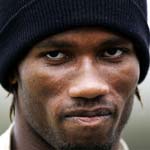 So the Prem season is almost over and I think it’s safe to now ask you the big question: who is your player of the season? We’ve listed our candidates below, but if you disagree with our shortlist, then click ‘Other’ in the poll and join the debate by adding a comment. For the record, Pies would give the award to Cristiano Ronaldo, whose coruscating form this season has been a revelation. Didier Drogba (pictured) and Michael Essien also deserve an honourable mention for storming seasons at the Bridge. Those three are clear favourites to me and it would be plain wrong if one of them didn’t win the offical PFA Player of the Season award. You might think differentlyâ€¦