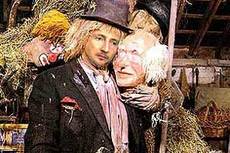 It’s been a bit quiet on the HolloWatch front for a bit, so it’s good to report that Ollie’s once again been giving good copy. After Plymouth’s 2-1 win at Luton on Saturday, when he left out defender Tony Capaldi, who wants to leave Home Park, Ollie took a pop at the Bosman ruling: ‘I think it’s a pile of donkey dung. FIFA should scrap the Bosman ruling and get back to the way it was where anybody who is out of contract should be owned by the club and he should be able to command a fee for them.’
Ollie’s splendid rant continues belowâ€¦

‘What they don’t realise is that players are risking their livelihoods. If one of them played today and broke their leg, they would be out of a job. It’s not a case of them having the freedom of Europe, it’s a case of them risking their careersâ€¦ They should give the clubs power and not the agents and the players.’
Holloway added: ‘They have got it wrong and the committee that sorted it out should look at it and change it now. They have a duty of care to every player and they have let them down.
‘I don’t blame the players, I blame the people at the top and unless they sort it out I’m never going to be a happy manâ€¦ If enough people talk about it something could happen – even a single-celled amoeba could understand it.’
Single-celled amoeba may be able to get their heads around the Bosman, but I suspect some players are marginally less intelligent than single-celled amoebaâ€¦